Here are some updates – guys I wrote about who have come back out of the woodwork, or ones where I realised I never  said how it ended.

This is the guy I was friends with in 2011. We slept together a few times and I think he quite liked me, but I had just come out of a relationship, and then he met someone.

In the summer of 2017, we started having regular text sex. He lives in a different city, and has a girlfriend and a little boy, but apparently his relationship with his girlfriend is pretty much over.

The text sex kind of made me feel special because he hasn’t even seen me for 5-6 years, but I think I have a one-that-got-away vibe for him. Last summer I was going on lots of underwhelming first dates, and really missing the Whippersnapper, so it cheered me up hearing from someone who liked me all those years ago.

However, ultimately I felt guilty towards his poor girlfriend, and I was glad when it fizzled out.

Until a few weeks ago! When I was cooking dinner for the Great Scot, my phone was on the kitchen counter as I was using it to check the recipe, and suddenly I got a text from James, for the first time in months. He sent me a couple of smiley face emojis, which I ignored as I was busy, cooking in an unfamiliar kitchen, while trying to manage my extreme lust for the Scot.

The following night, I replied. I said I’d been on a 5th date. He always used to text me when I was on my way home from disappointing dates and I’d tell him all about them, so it felt appropriate to say this:

He said it wasn’t weird but then the chat petered out quite quickly.

But then on the Tuesday he sent this:

Then he started texting me quite a lot, but not about sex.

He kept saying things like “it’s great about your man though” and I felt like he was writing it through gritted teeth. One thing we chat about is recipes, and he kept writing “you could make this for your man.”

Then, he started getting on my tits. It was too many texts, and I felt like he was bitter that I had met someone.

That was a Saturday afternoon, and it already seemed like it was going tits up with the Scot. I was feeling a bit gloomy and had decided to go for a walk, even though it was raining, as I knew getting out of the four walls would perk me up.

He jokingly texted me saying he was going to send me a “shower pic”, which turned out to be a photo of his actual shower, which I did think was amusing. I replied “Wow. Hardly any black mould. Impressive.” 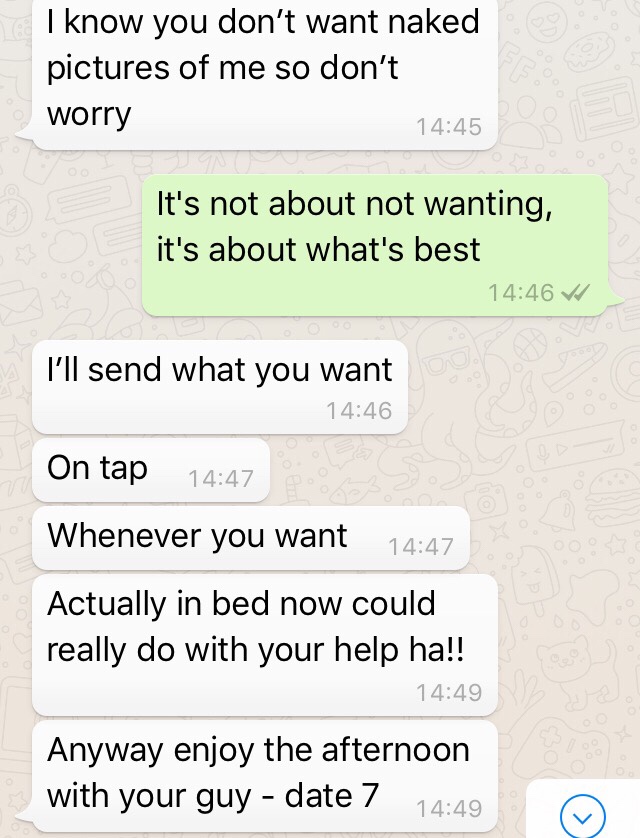 That last line pissed me off. I had told him I was just going out the door, but hadn’t said where I was going. It annoyed me that he was trying to re-establish some text sex, and it annoyed me that he assumed I was off for another date (especially I was only going to walk around the block in the rain). He seemed bitter that I had met someone, even though he has a girlfriend.

I didn’t reply, and the next day he sent some nicer messages with photos of biscuits he’d made, and now the messages have petered out again. Phew.

This was the fancy Police Man I went on a date with at the end of November. He seemed very nice and I kind of liked him, but every conversation came back to his job.

The conclusion at the end of that post, was that I would go on a second date with him, in case his conversation is usually really good, and he just kept cycling back to the work, on that occasion, because of first date nerves.

However, the second date never happened. When we were texting each other afterwards, I just really felt like we didn’t have that much in common, and the chat fizzled out.

I went on a first date with him in December. I didn’t feel 100% at ease with him, and I got inwardly, irrationally annoyed with him for unreasonable things, but we both enthusiastically texted each other afterwards, saying we wanted to do it again. I did think he was sexy and there were lots of things I liked about him.

We texted each other a lot, the following few days. Weirdly, I found that we got on better over text than we did in person.

Just before Christmas, he texted me saying he wanted to see me again but it would have to be in January. I said that would be great.

Then we never got back in contact. I assume he felt as unsure as I did.

This update is the best one to write.

I dated him from October 2016 to February 2017. I was absolutely bananas about him. It took a whole year to get over him, which is embarrassing.

A few weeks ago, I discovered he had a girlfriend. I was really upset. I loved him so much, and I was finally starting to get over him. I had never even worried about him meeting someone else, as he just didn’t seem capable of being in a relationship.

It really helped that I had the shag(s) of my life the next day, with the gorgeous Scot.

However, for a couple of days, my brain kept saying “hi! Would you like to see this image of him having sex with his girlfriend, which I’ve created you? It’s really detailed!” when I was in the middle of doing something complicated at work.

I talked to one of my CBT therapist friends on the phone and she suggested taking a more ACT approach. ACT is a kind of therapy related to CBT (Acceptance and Commitment Therapy) and one of the key ideas is that it’s not our upsetting thoughts or emotions that cause us problems – it’s our struggle against them.

So we decided I could just be like you know what? This just hurts a bit. Maybe it’s unusual that it still hurts now, but it was also unusual how quickly I got over some other things. It’s OK that it hurts. It just does.

As soon as I took that approach, it actually hurt less and the sex images instantly stopped.

I spoke to another CBT friend who said “I don’t use Twitter, but is there a way you can make it so you can’t see his profile? In case you’re tempted to look at it again? You could phone me if you feel tempted!”

Then, two days later, I looked at it again.

This time I saw a new GIF he’d made of them in bed together. They weren’t having sex, but he was at least naked from the waist up and they were under the duvet together. I think he was putting his arm around her in the GIF.

For a second, I felt like the painting The Scream.

Then, the clouds parted, and the sun shone down, and I thought this guy’s a moron!

I had been in bed with the Scot that weekend and we made a lot of things, but none of them were GIFs.

If I was scrolling through social media and saw a friend had made a GIF of them in bed with their partner, I’d think oh dear! Bit naff and quickly scroll past it.

It seems a bit narcissistic and pathetic.

It kind of made me realise he wasn’t the person I thought he was. I think he exaggerated how similar he was to me, because he wanted me to like him.

I talked to a work friend about the GIF and he said “what? Is he trying to make his relationship go viral or something?”

I didn’t think of this joke until later, but I could’ve said “well, one of these days he had to make something go viral that wasn’t an STI!” (because he had herpes and genital warts through our relationship).

I feel so much better. It’s like if you dislocate your shoulder – it really hurts, and then they have to push it back into the socket and that kills! But then it’s OK.

For ages my head knew he was just a slightly disappointing teenager, but my heart still loved him.

Now my heart has finally caught up too, and it feels AMAZING.

It reminds me of phones; when I was at my friend’s house the other day, I was sleeping in her spare room and there are always various interesting things scattered around that room. I was about to shout to her “oh, did you know you’ve left your phone in here?” because I saw a phone in her spare room.

Then I realised it wasn’t her current phone. It was an old iPhone 4.

It made me think how weird it is that your current phone is such a big deal in your life. You would feel lost if you left the house without it, you’re constantly looking at it, or it’s constantly trying to get your attention. Then, one day, you get a different phone, maybe after that phone had started working less and less well, and suddenly it changes.

One day, you can’t leave the house without it. The next day, it’s just put in a drawer. You still have it, but you only come across it when you’re looking for batteries or earphones or the warranty for the toaster. You could still look at it, or even charge it up and turn it back on if you wanted, but it’s not trying to grab your attention anymore.

I feel like that now. He’s gone from being my iPhone, which I’m constantly taking out of my pocket, to being a Nokia 3210 in a drawer, where I’m like Ha. Remember when that was my phone.

13 thoughts on “Whatever happened to…”