After things were a bit grim for a while, I’ve been on some good dates recently!

A couple of weeks ago I went on a first date with a lovely Scottish guy.

I saw his profile on OkCupid. He looked handsome and sweet in his photos. He’s couple of years younger than me. His profile said he had recently moved to London. He had good taste in music and films, and his profile was funny and endearing. The thing that sealed it for me was something good he put about politics.

We matched with each other, and I sent him a message saying “you look cool.” He replied saying the same back.

Over the next week or two, we messaged each other every few days. I kept forgetting to reply to him, as I had so many lads on the go at that time.

In my profile, I mention some TV shows I like, including ‘Neighbours’. Neighbours is an Australian soap that is really popular among teenagers in Britain.

I’ve loved it ever since I was a kid, and I would sometimes re-enact scenes from that day’s episode with my Duplo people.

Because Neighbours is terrible. And wonderful.

Only it turned out it wasn’t his dead wife, it was someone who looked like her trying to scam her inheritance. Then the scam artist ran off to London and Toadfish went after her. He walked down a London street with more red phone boxes and London landmarks photoshopped in the background than you can possibly imagine. 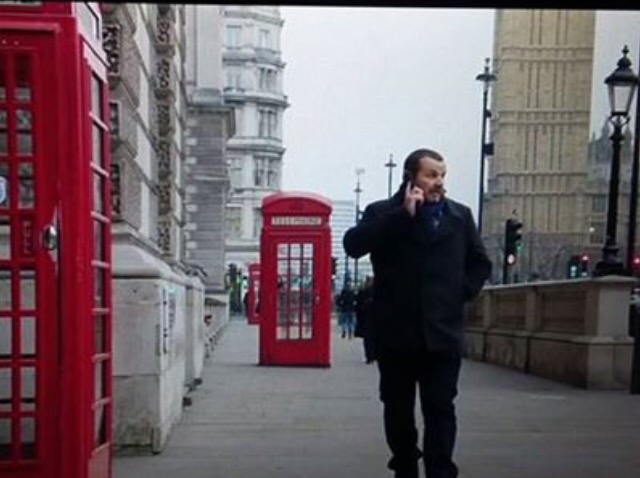 Then he got run over by a London black cab.

Anyway, the Scotsman said he loved Neighbours when he was younger and asked what had been happening. Then a few days later he said our conversation inspired him to buy an old Neighbours sticker album for his brother for Christmas.

He said “fire me your digits and I’ll send you a photo.”

Then in the morning he said “I apologise for saying ‘fire me your digits’. I don’t know what came over me.”

This made me like him even more. So I fired him my digits.

We arranged a date for a Saturday night, in Camden.

Saturday afternoon, I was Christmas shopping when I got a text from him, cancelling as he was too hungover. He seemed really keen to reschedule and suggested Monday or Wednesday.

“Fuck sake.” I said to myself in Marks and Spencer.

“I guess I could do Monday.” I replied crabbily.

Then he sent another message saying “Actually no. I won’t admit defeat. If you haven’t made plans I can still do tonight. I’m not that familiar with Camden. Where do you think would be good?”

I felt really pleased. I hadn’t realised how much I was looking forward to it.

“Haha, great! Sorry my response was probably a bit crabbier than usual as my date last night got cancelled in the same way. Plus I’m shopping and hungry!”

(The Chilean Lecturer had cancelled our second date the night before, literally an hour before we were supposed to meet, because he had bronchitis or something.)

He said “No worries. We are a notoriously flaky gender. I do apologise! 😄.”

I remembered the name of the pub I went to on my first date with the Bearded South African Man, which was in Camden, quiet enough to talk easily and really cool (the Colonel Fawcett – lovely roast dinners). I suggested that.

I realised it might’ve been quiet on that Sunday afternoon a few months ago, but it was really packed and really loud that night. It seemed like lots of people there were having Christmas parties. It would’ve been really difficult to have a first date there.

I waited outside, in the freezing cold, and he texted to say he was going to be about 20 minutes late.

I watched a few drunk Camden people get into Ubers outside the pub, and then he finally arrived.

Yes! Fit. I thought as we hugged in greeting.

He was tall, handsome and fresh-faced.

He apologised for being late. We agreed to find another pub where we could talk more easily.

“So, how are you feeling?” I asked, because of his hangover.

We found another pub. This one had free tables to sit at, but the music was still too loud to talk.

“What do you think?” I asked as we walked in.

He must’ve thought I asked what he wanted to drink, as he asked for a pint of something.

As I got drinks for us, he said “I think this one is louder than the last one!”

“Pardon?” I had to say a couple of times.

We sat down and started talking. Apart from struggling to hear each other, the conversation was easy.

We talked about Scotland; I’d had some family holidays there, and one of my best friends lived in Edinburgh for a few years.

I asked him if he thought the Loch Ness monster was real. He said no. We talked about the Ted Danson film.

He had a lovely Scottish accent but I could understand everything he said which was great.

Early on I thought this is going well.

He was handsome and fun and it was easy.

“Oh, I nearly forgot!” He said, reaching into his coat pocket.

He pulled out a packet of Neighbours stickers.

They were from 1989. I carefully examined every inch of the packet.

“You can open them, they’re yours!” He said.

“Oh my god, I thought they were for your brother! I thought you were just showing me!”

He said the actual Neighbours album was for his brother, but the stickers had come free and he was giving them to me.

I excitedly opened the packet. There were about 3 of Scott and Charlene’s wedding. 3 of the stickers were ‘corner stickers’, which he was excessively apologetic for.

I definitely want to kiss this guy tonight.

He asked me lots of questions and seemed interested, and told me about himself openly. The conversation flowed easily and it was fun. And he was fit.

After we finished our drinks, we decided to find somewhere else, where it was easier to talk.

It was cold, but we talked about how it’s warmer in London than the rest of the country, especially the North and Scotland.

“Yeah, I’m hardly ever cold in London, and I’m generally a very cold person…” I said.

“You don’t seem cold! You seem warm!” He said earnestly.

We went in about 3 different pubs, none of which were suitable.

“I think what we’re looking for might not exist in Camden on a Saturday night.” I said.

We decided to go back to the pub we were just in.

He suggested we get a bottle of wine between us.

We got onto New Year.

By this stage, I was a bit tipsy and I told him a story about a New Year’s Eve I had with an ex-boyfriend, a few years ago.

We were staying in together watching New Year’s Eve TV. We’d had a lovely day together. At about twenty to midnight, I’d said “I know what we should do! We should be having sex at the stroke of midnight! This is definitely a good idea.”

He’d agreed, but then we had a massive argument about whether to do it in the living-room or the bedroom.

I wanted to do it in the living-room so we could still have the TV on and see the fireworks, so we’d know exactly when it was New Year.

He was worried the neighbours would see in because he ‘didn’t trust the curtains’, even though we were on the 4th floor, so he wanted to do it in the safety of the bedroom.

By about 23:55, we had agreed to do it in the bedroom, but with the door open so we could hear the TV and hear when it was midnight.

We had the BBC on with the fireworks. As he tried to unwrap the condom, from the living room we could hear the crowd on the TV shouting “…TEN! …NINE! …EIGHT! …SEVEN!…”

It got to about 4 on the countdown before the pressure got too much, and we gave up. The partially unwrapped condom was cast aside and we just hugged, as Big Ben chimed the new year in.

The Scotsman said it was the best story he’d heard in a while.

I went to the toilet and thought about how I wanted him to kiss me. By this stage, I had noticed he was quite self-deprecating.

Quite a few times he would say something and then say “sorry, that was a really hungover question wasn’t it?” Or “sorry that was obvious, wasn’t it!”

Even though I was off-duty, I thought he probably had low self esteem.

Having said that, he was assertive in some ways, like when we’d been talking about music and I showed him something on Spotify, and then he put an album he thought I’d like in my library (“sorry if that was presumptuous” he said afterwards.) Also, the way he vetoed each of the too loud pubs was quite confident.

However, I thought his self-consciousness might get in the way of him cracking on with making a move.

The next time he said something self-critical, I said “do you think you’re a bit hard on yourself?”

We carried on talking, I can’t remember what about. We’d drunk a fair amount by then.

I gradually, stealthily inched my hands across the table towards his. Eventually, my hands went over the top into No Man’s Land and held his.

He seemed OK with this. Neither of us acknowledged the development but after a while, he had to break the hand-holding to do something with his phone or his drink, and then he firmly engaged the hand-holding.

I realised I had definitely missed the last train. When the bar seemed to be closing soon, I booked an Uber. He was going to get the night tube home.

“Do you want to do some kissing?” I said.

He laughed and said “I’ve never been asked that before!”

“Well, sometimes you both want to, but nobody says anything and you miss out!”

We kissed across the table. It was really nice. Really nice.

Then I left as my Uber had arrived.

I think as we were saying goodbye, outside the pub, I asked if he wanted to come back with me, but he said he shouldn’t.

He texted me about a second date after we parted ways.

16 thoughts on “The Neighbourly Scotsman”