Whippersnapper and I had some lovely kisses at the station before going our separate ways, on our third date.

Then, after the laborious goodbye, there was the awkwardness of each walking down a different staircase, only to end up standing, facing each other, on opposite platforms, while we waited for our trains. I pretended I hadn’t noticed and concentrated really hard on the information board, and my phone.

But then he texted me “I can see you across the platform! You’re gorgeous and lovely and so amazing. Thank you for yet another lovely night.”

“I know, I was trying to look nonchalant and alluring.” I replied.

Lots of tipsy, gushing compliments and streams of ‘xxx’s went back and forth. I sent a message saying “you’re great” and then added “even if you are riddled.”

I then thought better of it (even though he replied “hahaha”) and I added “thank you for being so lovely and honest. You don’t have anything to worry about.”

Finally our trains came and took us home in opposite directions.

I went to (sofa)bed and lay wide awake in the dark, feeling a mixture of emotions. I was absolutely awash with the pink afterglow of a fabulous date. Is there any better feeling than the excitement really liking someone, and they seem to feel the same?

I felt the usual guilt towards my ex-boyfriend for not being honest about where I had been. However, he was moving out the next week, just for a month, to house-sit for friends, so I was glad this was the last time.

And then there was the Herpes Revelation. My main reaction was thinking this is something that’s happening in my lovelife. Of course there’s some ridiculous twist!

My instinct was to find out more about herpes and problem-solve. The next day, I spent quite a while on the NHS website, reading about herpes. I knew a bit about it from a Laci Green video. Herpes gives you sores or blisters in your special place. It’s exactly the same virus as the cold sore virus.

80% of people carrying the herpes virus never have any symptoms and don’t even know.

If you have symptoms, you could quite easily pass it on during sex. When you don’t have any symptoms, most of the time you can’t pass it on, but you have the odd random day of ‘viral shedding’ where you could. There’s no way of knowing when you’re viral shedding.

Lots of people have one outbreak and never have another. Other people have the odd outbreak, more likely when their immune system is down (like with cold sores).

It seems like, what it means for me, is that we would always have to use condoms, and even then there’s a slight risk of catching it because it’s transmitted by skin to skin contact and condoms don’t cover everything. I’ve had problems with pretty much every type of contraception so I’m fine with condoms. The only thing that made my heart sink a bit was reading that you’re supposed to use condoms for oral sex too. I wasn’t sure if my moves would lend themselves to that.

I was also idly curious what a couple would do if they were trying to get pregnant and one partner had herpes.

It wasn’t until a few days later, when talking to a friend, that it even occurred to me that it was an option to stop dating Whippersnapper because of the herpes. I thought this course of action was not for me because

a) I really like him. I’d be the one missing out on something special if I walked away because of this.

b) ethically, he did the right thing by telling me. Everything I read about herpes says you should tell all your future partners. If he hadn’t told me, I wouldn’t know, so it feels wrong to punish someone for doing the right thing.

c) everyone has something about them – their health, their past, their life circumstances, their appearance, their personality, which is not ideal. I have lots of things about me that are not ideal.

d) people with herpes deserve love and sex just as much as people without herpes.

e) it’s exactly the same virus as the cold sore virus. If he had cold sores on his mouth, no one would say “shit, are you going to carry on seeing him?”. It’s just that genital herpes is stigmatised because it’s to do with sex.

I considered not writing about the herpes, because there’s a chance it might actually go somewhere with this guy, and a chance he might find out about this blog. But I think people should be talking about sexual health more. Everyone is impressed he was honest with me, and I am too. However, I think it’s depressing that the bar is so low that what should be the absolute baseline is considered honest and chivalrous. Now it’s on my radar more, I keep hearing of people with herpes who don’t tell their sexual partners. We’re crap at being open about sexual health. We’re also crap at responding sensibly when someone else is open about their sexual health.

So I decided to write about it. Which is very generous of me, with someone else’s incredibly personal, medical issue.

So, my ex-boyfriend moved out for the month, a few days later, and I had the flat to myself.

After a red hot conversation with WS about how much we wanted each other, we arranged for him to come round to mine for dinner that Friday.

I was so excited. Each morning when I woke up, my first thought was how many days it was until Friday.

Then, on Tuesday morning, I was driving to work when I got a sad message from him saying, sorry if it was too much information, but he thought he was having another outbreak. He sounded so unhappy.

I replied: “Oh Whip, you poor thing, I’m so sorry you’re having these horrible symptoms.
A couple of things – firstly, I think we’ve established there is no ‘too much info’ with me.
Secondly, thanks for being honest with me.
Thirdly, just to reiterate this doesn’t put me off you, it’s just one of those unfortunate things that could happen to anyone. I still want to hang out with you, even if I can’t shag the shit out of you yet, but I also appreciate you might not feel like it.
Lastly, think about it and tell me how I can help the most. I can leave you alone and give you space or I can keep you company while you get it sorted, as much as you like.”

He replied saying it was the best message ever. I then sent him the photo of a crab wearing a top hat, which I always look at when I need cheering up. I then sent an apology a few minutes later, in case a crab is not appropriate for someone struggling with sexual health. 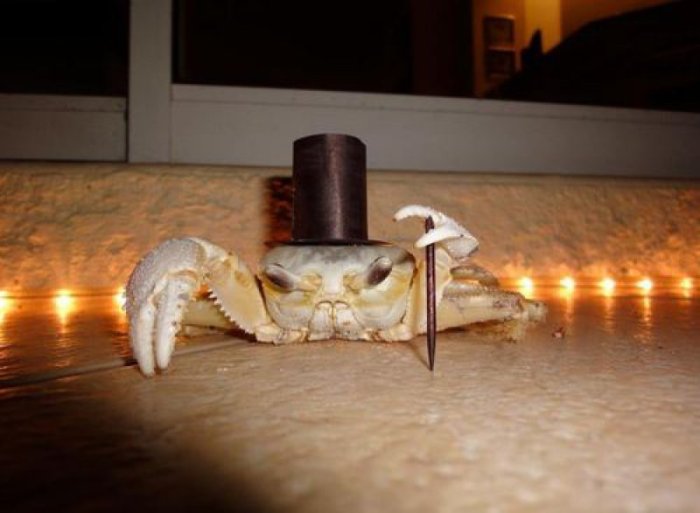 We kind of had a lovely day, with him sending me updates and me sending him encouragement. We postponed dinner for a week. It turned out not to be herpes, but something else that’s not an STI.

One night that week, I was getting ready for bed and saw my body in the mirror. I had been thinking about how to cheer him up, and had an idea.

I texted him saying “Whip, I was wondering – this might seem very presumptuous or vain, but would you like a photo of my breasts, to tide you over? Like – not naked breasts, I haven’t gone completely mad, but like an underwear photo?”

He replied immediately saying yes, quite emphatically, and then sent a follow-up message saying “pleeeeease” with 5 extra ‘e’s and a smiley face.

I laughed and texted him a photo. He sent a couple of complimentary messages, and then asked if, when we had sex, he could “finish on them”.

To be honest, I wouldn’t have minded a bit more reassurance about my body before we moved on to finalising the admin of who was going to ejaculate where, but there was something charming, in a rakish way, about it.

He then followed it up with a lovely message about how I was his finishing line, like how runners are told to imagine the glory of reaching the finishing line, when they hit the wall in a marathon.

One of my friends was quite negative about it all, and while it didn’t change anything, it did make me think – WS is a self-confessed Former Rogue. There’s a very slight chance I could get herpes from him. What if we sleep together and he decides he just wants to be a rogue again, but I’m left with herpes?

I decided to go to a sexual health clinic to get all my herpes questions answered. As I sat in the waiting room, I probably felt more laid back than the average sexual health punter. This was mainly because I knew there was nothing wrong with me, but also, despite my incredibly pedestrian sexual history, I’ve been on the contraceptive injection, so I used to go to a clinic every 3 months. Also, because I’m a healthcare professional, I know sexual health professionals tend to be pretty cool.

Which is why I was completely unprepared for the absolutely terrifying Scottish lady who called me into her office.

I explained the reason for my appointment and got out my hand-written list of questions. I think at first, she thought I was being disparaging towards Whippersnapper for having herpes, so she seemed a bit affronted on his behalf. She was quite blase about herpes, and I guess compared to other problems her patients have, I can see why. I also guess it’s rare that people go to that clinic with a pre-emptive STI query.

It seemed like she did warm to me as the appointment went on, and overall she seemed really nice, even though I wouldn’t want to piss her off. Most of my questions were things like “what’s the risk of me catching it if we do x” and “what’s the risk if y“, and really, I wanted an exact percentage, which would be impossible for anyone to know.

Overall, she said that the risk of me catching it is low if we use protection, and if I do catch it, the risk of me having symptoms is low, and if I do have symptoms, it’s not the end of the world. She said if he gets good at recognising the warning signs of an outbreak, like tingling, and we don’t have sex then, it’ll reduce the risk.

I got towards the end of my list of questions, and paused. “I’m trying to find a non-embarrassing way of phrasing this.”

“Umm, well, we haven’t done anything sexual at all yet, but we have exchanged some quite graphic text messages. I think he’s quite keen to, you know, complete the… task… on my breasts. But if he does that, can I get breast herpes?”

“I’ve never been asked that before.” she replied, and gave me a leaflet.

11 thoughts on “Love in the time of herpes”